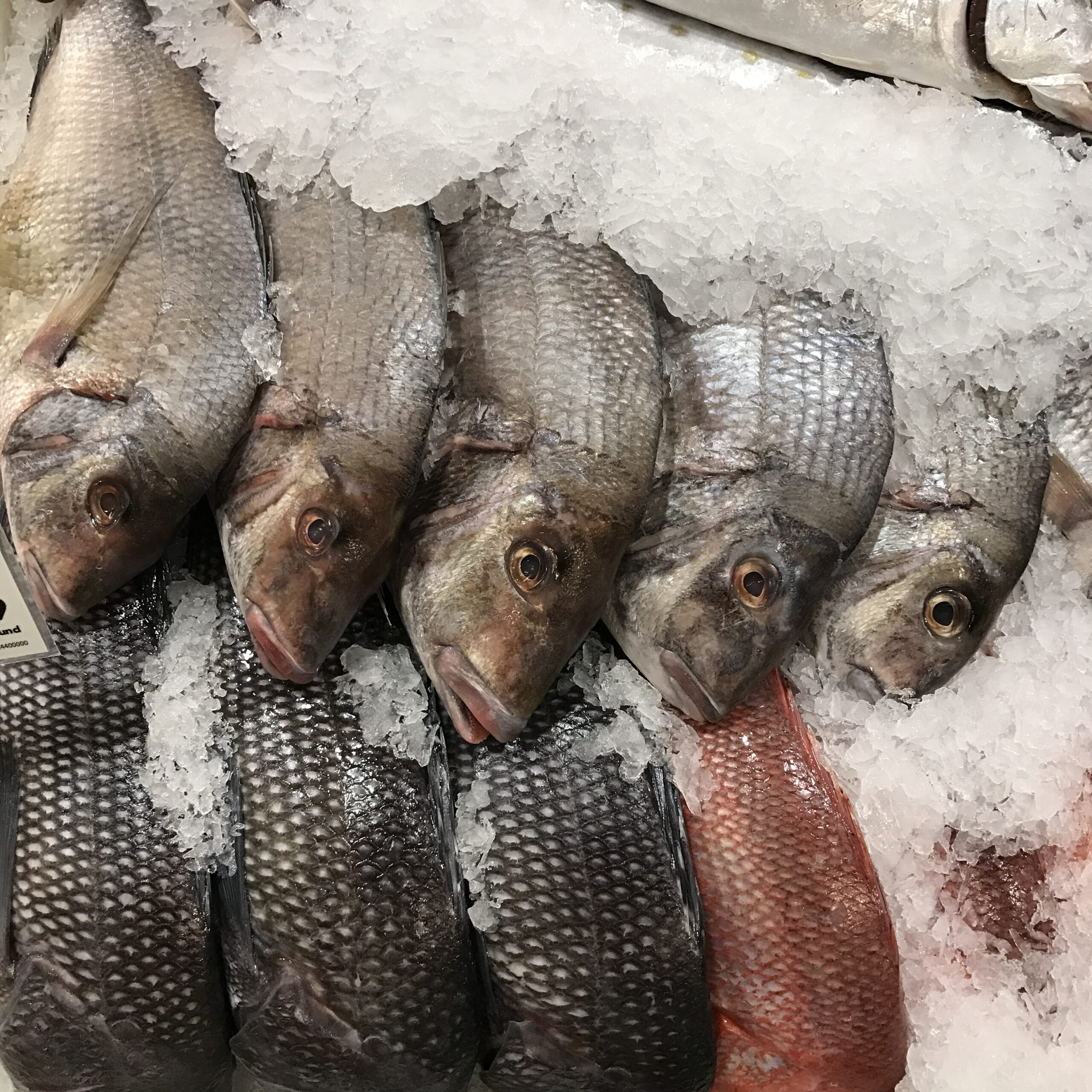 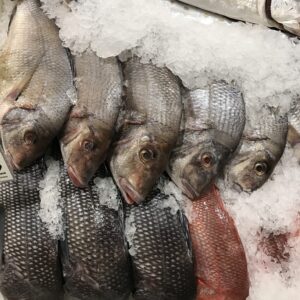 People either love or hate this Italian tradition.  Naturally, those who love seafood love it more than any other time of year, and those who do not eat seafood or are allergic hate it for obvious reasons.  It shouldn’t be the case though, especially in an old school Italian household where there is still enough food to feed an army. If not, have a slice of pizza to hold you over until you get to the pastries served afterward.

The Christmas Eve fishes dinner can be dated back to well before Christian times.  Even before Christianity was legalized, the winter solstice (December 25th) was also the birthday of another God known as Mithra.  In 1500 BC the Ancient Persians believed he was born from a virgin (like Jesus) and was also a vegetarian.  This is how the holiday feast managed to make it from thousands of years ago into 21st century.

The significance of 7 is another story.  Mithra had 7 rituals, Jesus was a Jew and there are 8 days of Channukah, and then the Christians reverted back to the number 7 to represent the 7 sacraments.  Eventually the founders of Kwanzaa has a winter holiday tradition as well focusing on the 7 principles, one each day.  You get the idea.  Its called harmony, and somehow we have all been trying to live together with similarities, in spite of our differences.

While traditions like this are often lost on the younger generation, my friend Vinny has kept up the festivities for nearly 20 years (yes, we were the younger generation not so long ago).  Unfortunately, this year there are many restrictions due to the pandemic.  What was once a party of 20-30 people or more, is not just limited to his wife and 3 kids.

While I normally would be sharing images of all the fish courses on social media like Instagram and Twitter, this year I have to do it in a blog.  And by the way, yes, the correct term it is “Fishes”.  When you have one type of fish its fish, when you have a whole group (known as a school), its still fish.  However, when you have different types of fish, then it is fishes.  If you had different types of shrimp, then it would be shrimps.  I am getting hungry already. 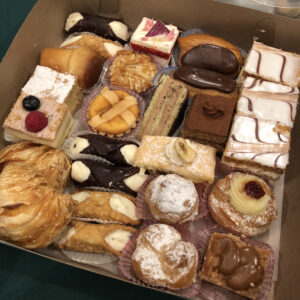 If this looks overwhelming, it is.  This is not done in one sitting, one plate or one hour.  This feast usually starts around 2pm in the afternoon after fasting all day, and can easily go until midnight.  Not everything is prepared at once, and just remember there is pastry served at the end as we approach midnight and the birth of Christ.

One thing for sure, there will be plenty of wine, so pace yourself. You do not want to be the person passed out on the couch before things even get halfway done, much less before dessert.  While most might think this is only a red or only white wine affair, it is not the case.  Most people know Italians favor rich red wines, but white is always served with seafood.  The fact is, wine should always compliment the food. So if you don’t like the taste of white, go with a lighter red. If you find white wines too acidic, it is not going to compliment the taste of anything so drink what you like.  Normally everyone brings a bottle and we all share, compare, and contrast.

Don’t be surprised to see some homemade wine come out to see how we did last year.  It might not be for everyone, so if you do not like homemade wine, just take a sip to be polite, but do not waste it.  This is like gold, it is a very long, laborious process. 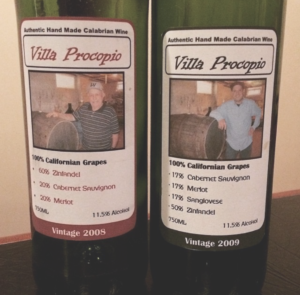 Arguing over the recipes or proper preparation would be just as futile as to determining which fish to include. The truth is, it does not matter. It is whatever is freshest, available, and depending on the budget.  Let’s face it, this year has not been very good to most of us, so canned tuna and anchovies might count as two of the severn courses. Next year, let’s hope caviar and lobster make a debut. 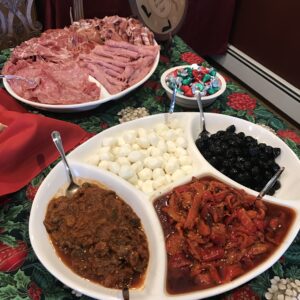 Here are some that most would agree on. As always, be a good host and offer the landlovers some options, and you cannot go wrong with the Antipasti (olives, cured meats, cheeses, tomatoes, etc). 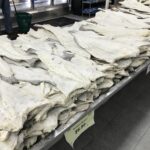 Baccala (Cod): This is probably the most common, not just in an Italian household but Portuguese (and Brazilian) as well.  When voyagers first came to North America, they had to find a way to bring preserve fish for the voyage back to Europe.  They cleaned the cod found in the North Atlantic, and buried in it a lot of salt.  Naturally it dried out, and they would start soaking it fresh water as they needed it.  Today you need to buy it a week in advance and soak it for days.  Some even suggest milk, but if you use water, the water should be changed daily. 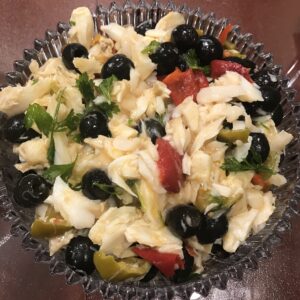 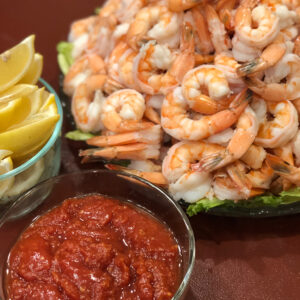 Gambretto (Shrimp, Prawns): Other parts of the world have different species of this shellfish, but they normally just vary in size.  This is another type of seafood which can be served chilled as a cocktail with lemon and tarter sauce, or better yet, in a hot dish with butter, wine and garlic and served over linguini. 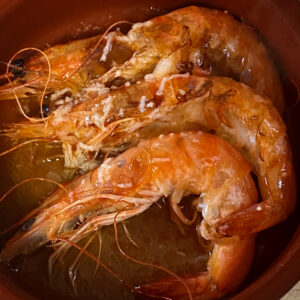 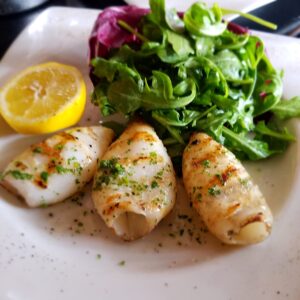 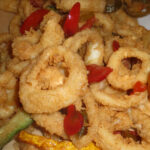 Calamari (Squid): Another easy, inexpensive seafood to prepare.  Naturally, people love it lightly breaded and fried, but it cooks fast, so it can be grilled or boiled for just a few minutes.  If it is boiled, it is usually chilled and put in a salad.  Many like it stuffed in either red or white sauce, but my preference is fried. 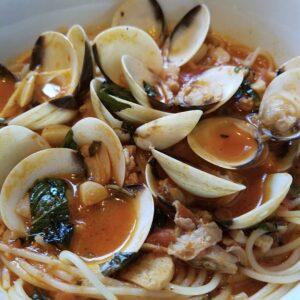 Vongole (Clams): One of my favorites, they are prepared “oreganata” bread crumbs and a lot of oregano.  One of the halves removed, dusted with breadcrumbs, garlic, parsley and possibly some parmesan cheese, and baked.

Mussels (Cozze): Another favorite, especially if its served in a spicy marinara sauce called Fra Diavolo. Add some fresh Italian bread and I can make a meal of this all on its own. 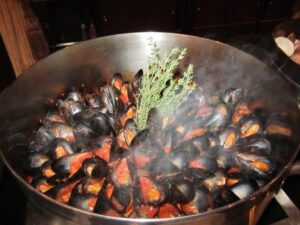 Pesce (Fish): Yes, actual fish here that swim. Almost always in filets and baked with lemon and white wine.  This is usually served toward last and would serve as the main entree.  However, people like my friend Vinny go for the broiled lobster, regular fish is just food for the stray cats. 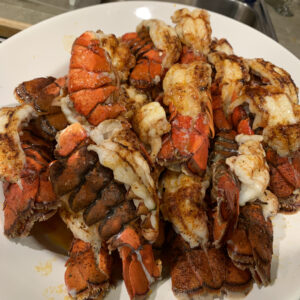 Of course there are dozens of variations. My family “down the shore” in South Jersey would cook crabs because they were so abundant, and often free (my one Aunt lived on a lagoon with the bay in front of her house).  While not fun to remove the shells, they can be used as a cold appetizer, in a sauce, fritters, oreganata, etc. 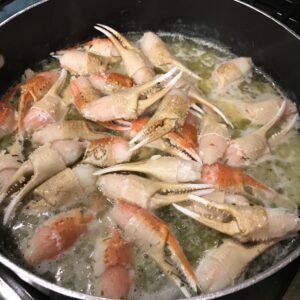 If you are really hardcore old school Italian, you certainly would be familiar with live eels (no thanks), pulpo (octopus) and other things that no matter how good they taste, no one attempts because you always eat with your eyes first, and these things look scary at best. 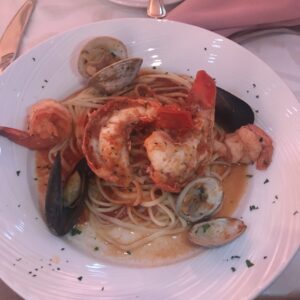 For those who prefer to dine out this day, but keep the tradition, you probably will be ordering “cioppino”.  This originated in San Francisco by a large immigrant population and is basically a seafood stew in a light tomato broth.  The seafood typically includes scallops, shrimp, chunks of fish, clams, mussels, and maybe even a lobster tail.

Don’t forget to save room for dessert. 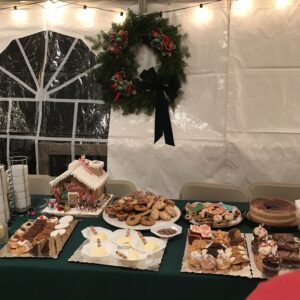 There are no real rules when it comes to eating fish on Christmas Eve, but it does have to be seafood.  If you are so ambitious to serve all 7 courses of fish, remember not to make them all fried, nor all baked, not all shellfish, etc.  This is the whole idea and fun behind so many courses.

Let’s hope we can continue this tradition next Christmas. Think of how fast this year went by, and thank God its almost gone and we can move toward a new vaccine and get back to living.  It was hard enough before, but in 2021 it is my hope we will all be a lot more grateful for all these things we take for granted.

View the video version I created for Ravenite Club below or at YouTube.com/RaveniteClub